Community members are encouraged to call ahead to schedule appointments with individual agents.

Find this article at:
go.ncsu.edu/readext?678277
— Written By Kathryn Holmes

Eastern Tent Caterpillars have been crawling around. The caterpillars feed on wild cherry, crabapples, hawthorn, maples, and a variety of fruit trees.

These caterpillars hatched out of their egg masses about 4-6 weeks ago! There can be between 150-400 eggs in an egg mass. So there are lots of caterpillars crawling on sidewalks, roads, mulch, and plants! The caterpillars are especially active in the early morning and early evenings.

The black caterpillars have a white stripe down their backs, brown and yellow bands and a row of blue oval spots on their sides. If you look closely you can see white bristle hairs. These caterpillars are not stinging caterpillars but the hairs sometimes cause skin to react and itch.

If caterpillar feeding is severe enough to defoliate a tree, the tree usually recovers and leafs out a second time.

These pests come out each year in early spring to late summer, but some years populations are higher than other years. Soon they will be making cocoons and not on walkways and roads. 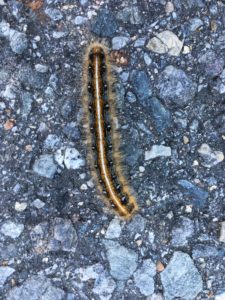 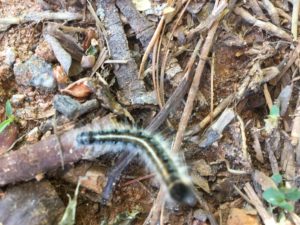 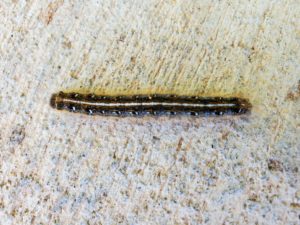