Community members are encouraged to call ahead to schedule appointments with individual agents.

Find this article at:
go.ncsu.edu/readext?698252
— Written By Abby Whitaker

Vetch can be both useful and concerning, depending on how much and where it is growing. It has a unique look with alternating leaves, paired flowers, and is called “pealike”. Direction of growth depends on the specific type of vetch, as some almost climb, while others stand more alone.

Vetch is commonly used as a cover crop because it is a legume. In field cropping systems, it can be very useful to add nitrogen back to the soil. If there is too much Vetch in a pasture, it is concerning because of its toxicity levels to some cattle and horses. It poses a risk to livestock through all of its stages of growth, but even more so as it matures. Research shows that keeping pastures at less than 10% vetch reduces the risk. It is very important to monitor from year to year and even throughout the season, as to how much vetch is in your pasture. It can vary greatly depending on weather and fertilization.

The symptoms of Vetch Toxicosis tend to be more severe in older cattle and vary from herd to herd. Some cattle may go unaffected for years and then show symptoms unexpectedly. According to research from Purdue University, “A genetic predisposition is also suggested because vetch-associated systemic granulomatous disease occurs mainly in Holstein and Angus cattle”. Vetch Toxicosis Information

So while vetch can provide benefits to your soil as a cover crop, it does not come without risk in livestock grazing systems. It must be managed differently in pastures than it is in field crops. If vetch is growing in your pastures now, be sure to keep an eye out for excessive growth that may be above 10% of the total forages available to your animals. Here is a good article explaining the need to dilute down exposure to vetch. Vetch Article 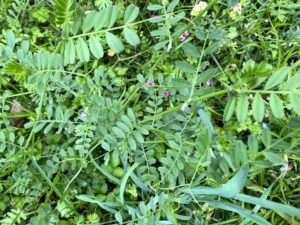