Curly Dock is a perennial weed with a large taproot. It starts out growing in a large rosette stage with leaves as long as 12 inches and can have a reddish tint along the veins. Later in the growing season, curly dock will “bolt” and start growing upright, up to 5 foot tall, and go to seed. Seeds can remain dormant in the soil for up to 80 years. Each plant can produce thousands of seeds each year and is also capable of spreading vegetatively through the taproot.

Curly dock can be problematic in pastures and hayfields because of how much space it takes up when actively growing. Especially in the rosette stage, curly dock has a large footprint in our pastures and is competing against more desirable forages for space, water, and nutrients. If consumed in large amounts, it can be toxic to grazing animals. However, it is unlikely for them to consume enough to be problematic if they have other things to graze that they would rather eat instead.

Mowing can be an effective way to reduce seed production if it fits into your management plan. If still in the rosette stage, it will probably be too close to the ground to be mowed. Scout your pastures for when your curly dock is bolting but hasn’t gone to seed yet. This will help you mow it down when it is tall enough and lessen seed production. Hand removal can be considered effective in small populations of curly dock. Remember that it is a perennial, so be sure to remove the entire taproot.

Chemical control is a great option to consider for longer-term control. Since it is a perennial, it is important to note that reduced seed production from mowing is helpful, but will not help as much with controlling the taproot. Chemical control will be more effective on smaller, actively growing plants than larger ones that have already bolted. Scout your pastures now and evaluate your curly dock stage of growth. 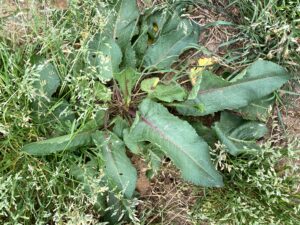